In the last post I told you about the main (and for 99.9% of physicians and their patients) the only test for a gluten allergy is to test “alpha gliadin” for Celiac’s disease. Unfortunately, this is extremely limited according to the current research and in spite of what you’ve been told, Celiac’s disease isn’t the only “disease” caused by gluten intolerance . Additionally, the alpha gliadin test used to test Celiac’s disease may produce a clinically negative result.

The reason is, a gluten allergy (intolerance or sensitivity) is much more complex than previously understood. And, it is very likely that your physician doesn’t understand or know about the complexities. So here’s a summary of what you need to know:

The “go to” test for the past several decades has been to test for alpha gliadin. This test for a TG-2 (Transglutimase-2) reaction in your gut. But as discussed in the previous post, gluten can and does react in “extra-intestinal” sites of the body. TG-3 reactions in the skin and TG-6 in the central nervous system. So, these must be tested for as well. But wait, there’s more…

You also need to test for:

Gluten is made up of glutenin (the sticky stuff) and a protein called gliadin. Most labs only test for Celiac’s disease by testing for alpha gliadin antibodies. The problem is that gliadin is further broken down into alpha, omega and gamma portions. This is why testing for alpha gliadin is incomplete and a very small part of the picture. It’s also why you could have already been tested by your doctor, told your exam was negative, been told you don’t have a gluten allergy which in fact you very well still may.

There are more components of wheat that can cause you to have a reaction as well. Another component of wheat is lectin. Lectins are the part of wheat that bind sugars & carbs together. In wheat, it is known as wheat germ agglutinin or WGA. Interestingly, the highest amounts of WGA is found in whole wheat & sprouted wheat (but wait, all these years, mom and everyone in the health food store has been telling you to eat whole wheat because “it’s good for you”…oops). WGA can pass through the blood-brain barrier and attach to the protective covering that surrounds nerves known as the myelin sheath. You can test negative for gluten and still be sensitive to WGA. And although the most common test done for gluten allergies, sensitivities and intolerances would never reveal you have a WGA sensitivity…all while destroying your neurons.

Finally, you can have an immune response to something called gluten opiods. This causes yet another nervous system reaction to “gluten” and yes, another thing not tested for in your common every day gluten test. The only way to test to see if you react to gluten opiods is to test for antibodies to (1) gluteomorphin and (2) prodynorphin. The gluteomorphin is a peptide” formed when you digest gluten. The prodynorphin is a basic building block of endorphins. Now, here’s another thing to think about. I’m sure you’ve heard of opium before. Hopefully now you’re starting to connect the dots here. If this is where your gluten sensitivity or allergy lies, then you may go have some withdrawal symptoms when you go gluten free. Yes, that’s right-you can be addicted to gluten and gluten products.

Wouldn’t it be very interesting if a large food manufacturing corporation could get the population at large addicted to it’s food products legally? But I digress.

Zig Ziglar, the great motivational speaker always use to say “you cannot hit a target that you can’t see”. This or course was in the context of writing goals for yourself, your life and your business to create success. If your gluten test is only testing for alpha gliadin, then you’re not going to find allergies to omega gliadin, gamma gliadin, deamidated gliadin, WGA, gluteomorphin, prodynorphin, TG-2, TG-3 and/or TG-6. If it is your goal to find out if gluten is at the root of your problems, then if you have any hope of successfully finding an answer, you have to set your goals on hitting the right target. Or, in this case, targets.

If it your goal to find out if your health problems are related to gluten and to find out of you have a gluten allergy, intolerance or sensitivity, then you need to be tested for the following:

Basically, what you do it print out this list and bring it to your physician and tell him or her that this is what you want to be tested for. Easy right? Sorry, it’s not that easy. The thing is, the current gold standard (actually it should be called the fools gold standard) is the Celiac’s disease test for alpha gliadin. That’s what every lab in the county does, except for one. Cyrex Labs (cyrexlabs.com).

Ask your doctor you want the Wheat/Gluten Proteome Sensitivity and Autoimmunity Panel. But if you do get this test, be prepared. If you get a positive result, you’re going to have to give up gluten forever. Otherwise, you’ll simply continue to have the problems you’re having and over time, your symptoms will, in all probability, continue to worsen. It’s that plain and simple. 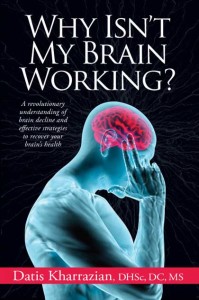 Gluten is a bigger problem than you have been led to believe. It’s not just an abdominal / gut problem, it’s a nervous system problem, a skin problem, a brain problem…it’s a whole body

problem. And if you’re gluten sensitive, it’s your problem and you need to do something about it. I know I have.

Let me give you some assurance…there is (a great) life after gluten.

For more information, I highly suggest reading the book Why Isn’t My Brain Working, by Dr. Datis Kharrazian.

Just some more food for thought….Literally

Dr. Narson is a 2-term past president of the Florida Chiropractic Association’s Council on Sports Injuries, Physical Fitness & Rehabilitation and was honored as the recipient of the coveted Chiropractic Sports Physician of the Year Award in 1999-2000. He practices in Miami Beach, Florida at the Miami Beach Family & Sports Chiropractic Center; A Facility for Natural Sports Medicine.